What is Flange Focal Distance? The simple textbook answer is FFD represents the distance from the lens mount (the flange) to the film plane. (The vertical plane of the sensor.)

If your eyes are starting to glass over, don’t worry. It is nowhere as complex as it sounds.

Inside every interchangeable lens you will find elements designed to project the view from the lens onto a fixed vertical plane. This vertical surface is known as the film plane. The lens expects the film plane to be a precise distance from the rear element, although this distance varies by manufacturer and lens line.

Photographic lenses consist of a complex collection of elements that gather light rays and focus them at a specific location. The sharpness of the lens is dependent on how well it is able to concentrate a focused image on the film plane.

If you examine the top of any camera, you will most likely find a symbol consisting of a circle with a line intersecting it. The line indicates the exact location of the film plane. This symbol is a useful aid for those creating extreme close-up photographs, but most photographers will never require this information. Still, it is worth understanding where the film plane lies.

A digital camera’s sensor is located on the film plane. In the same way, the film in an analog camera is arranged so it lies on the film plane. The measurement between the lens mount and film plane is called the Flange Focal Distance, which can vary for each camera manufacturer. 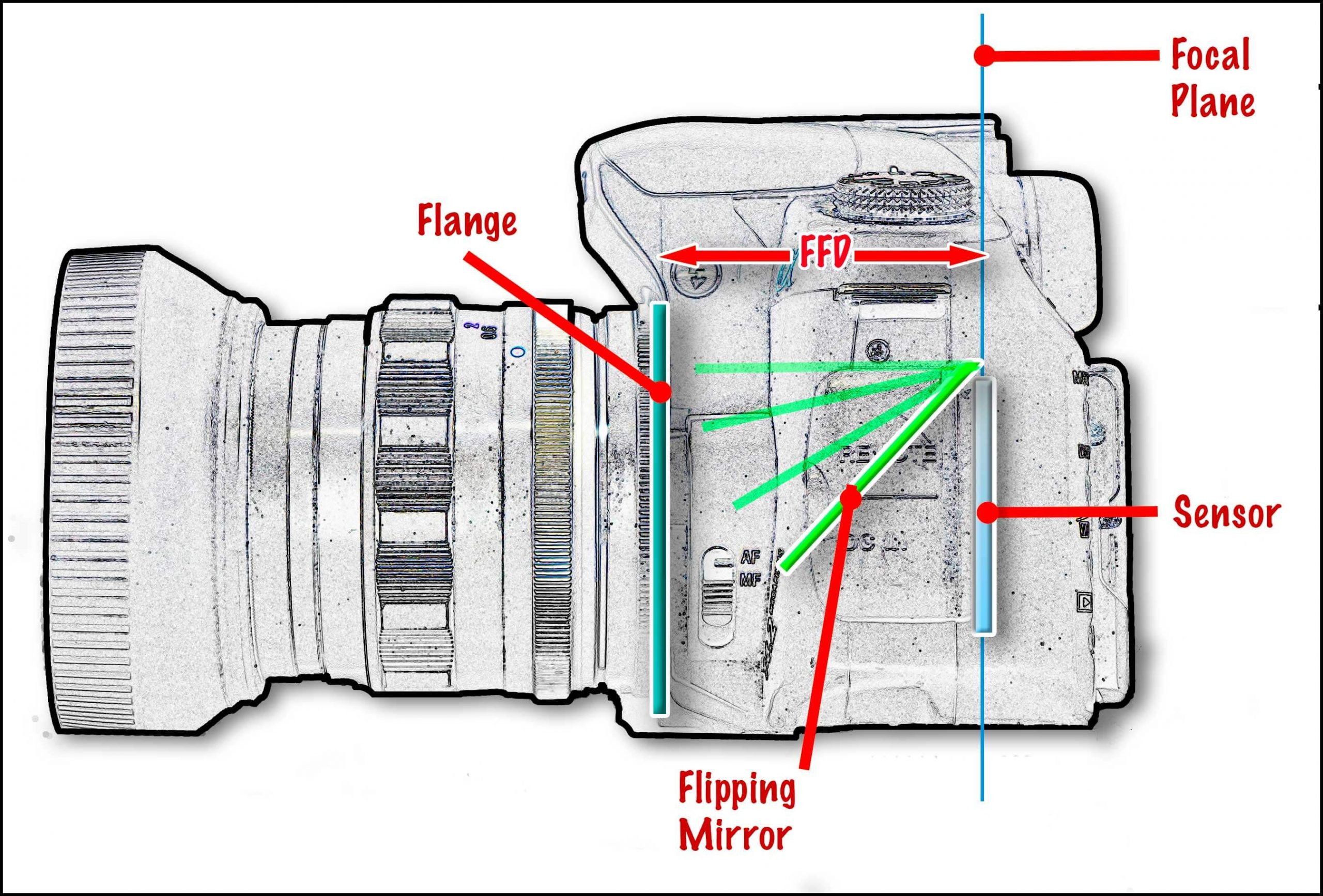 On a dSLR the Flange Focal Distance must be large enough to include the mirror box. 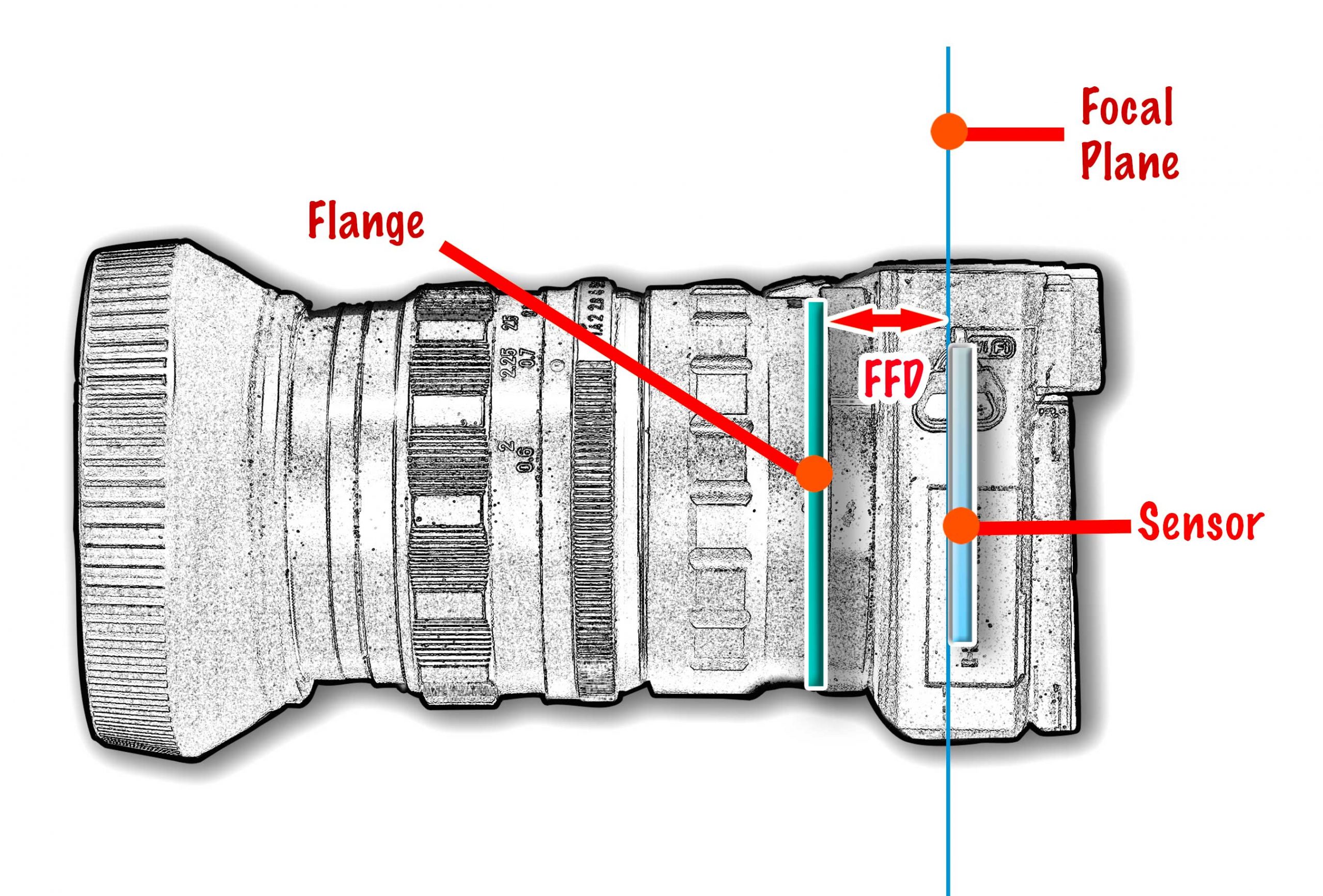 With no need for a mirror box, evil (mirrorless) cameras can be designed with a much smaller Flange Focal Distance.

A dSLR camera will require a large FFD because the mirror and ground glass occupies the space between the lens mount and the film plane. The film plane can be placed much closer to a mirrorless camera’s lens mount, but even mirrorless cameras need some separation between the lens and the sensor. So E-Mount cameras have an FFD, although it is considerably smaller than that of a dSLR. 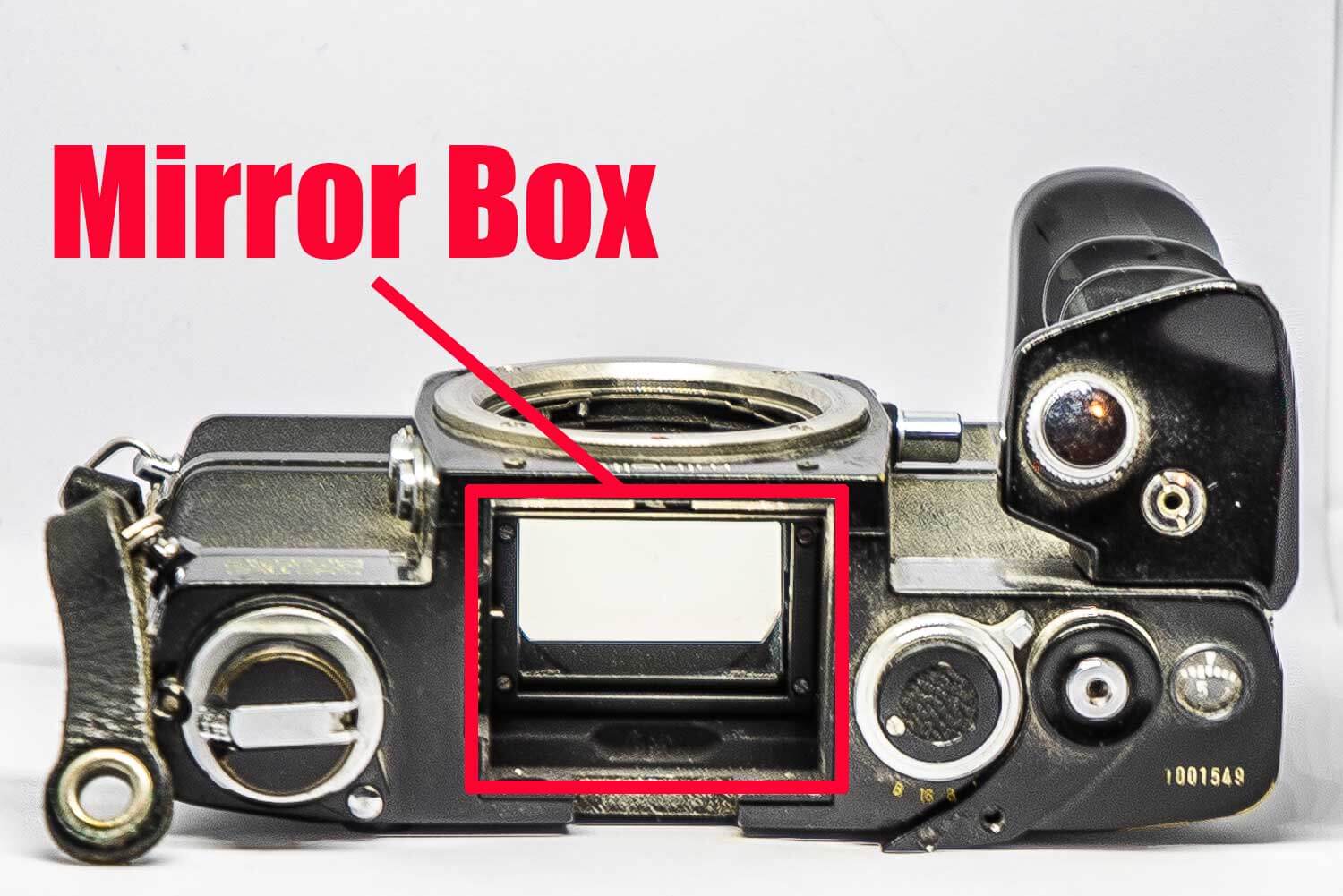 Every manufacturer settles on an FFD for their lenses. In the case of Minolta, the original Rokkor (SM Mount) lenses are designed to focus correctly at an FFD of 43.50 mm. All SM Mount lenses were created to have a point of convergence at that distance. 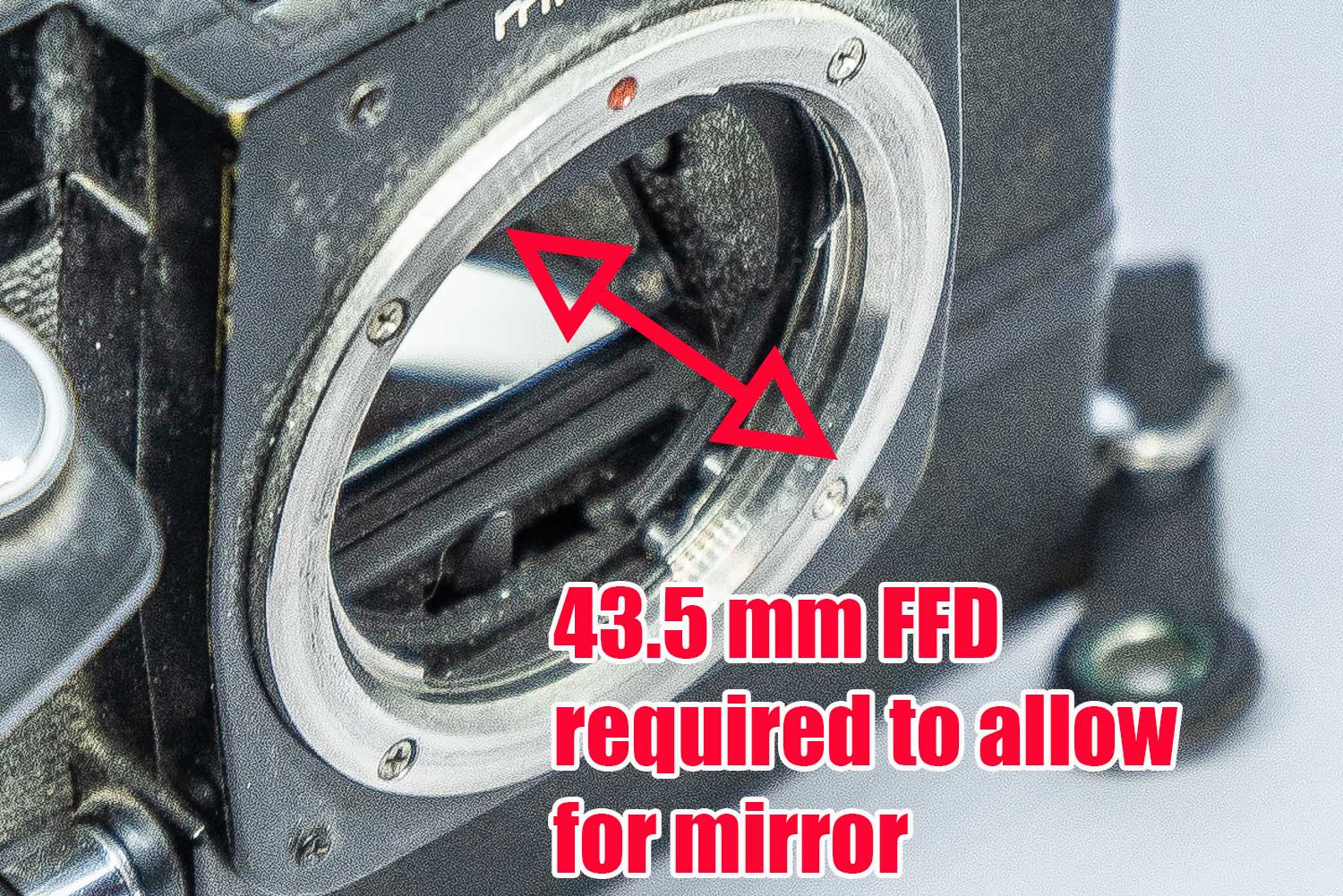 SR mount cameras require a FFD of 43.5 to allow for the mirror box. 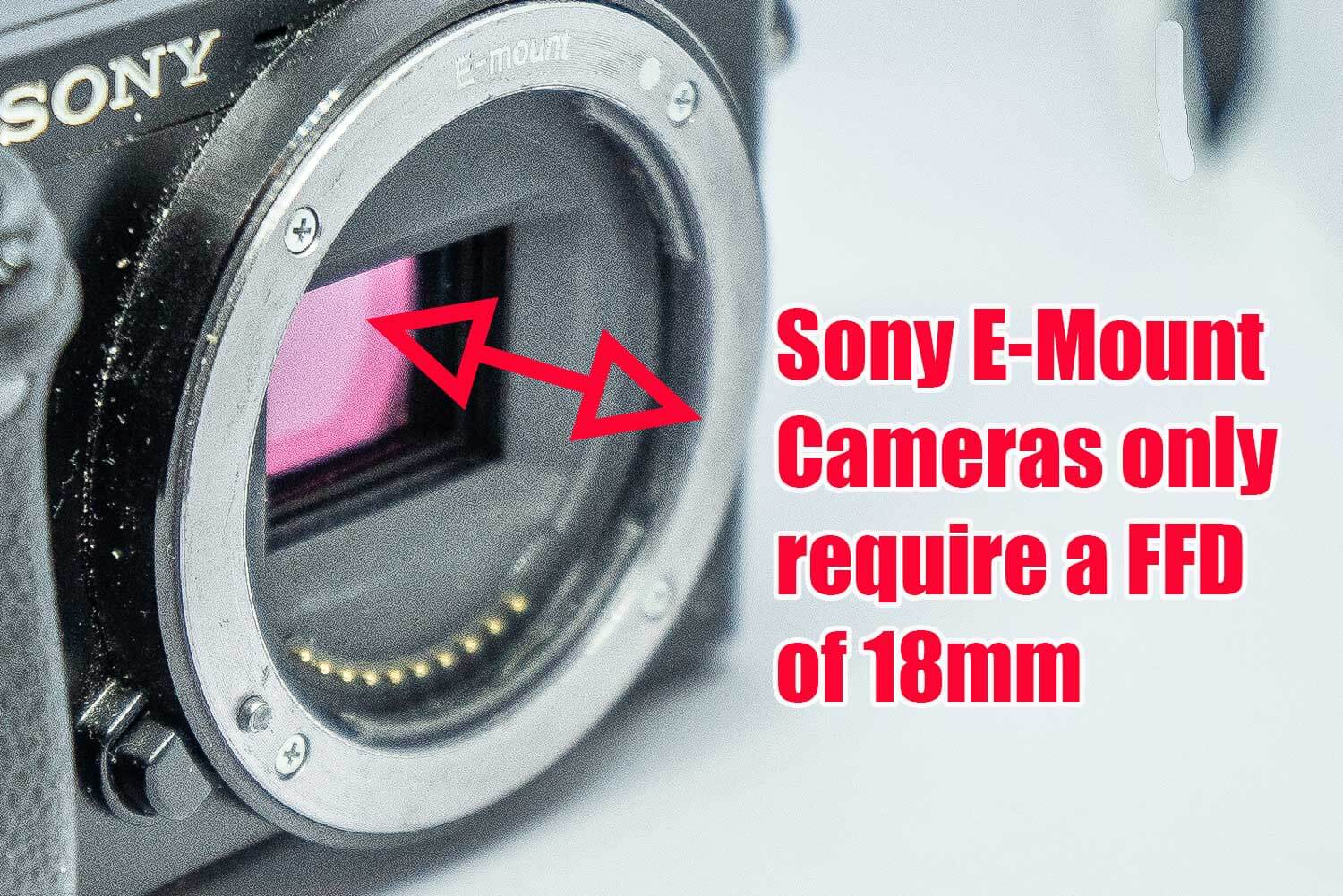 E-Mount and NEX cameras only require an 18mm FFD.

When Minolta introduced the A-Mount cameras, the auto-focus mechanism required additional space. Thus, the FFD of the A-Mount lenses was increased to 44.50 mm. When Sony acquired Minolta in 2006, they retained the A-Mount, which meant the Sony dSLRs also maintained the 44.50 mm FFD.

Since the NEX and subsequent E-Mount Sony cameras do not use a mirror and ground glass, the engineers were free to reduce the FFD to a mere 18mm. In addition to making the cameras lighter and more compact, the smaller FFD made it ridiculously simple to adapt a variety of dSLR lenses to the new evil cameras.

Because dSLR lenses were created with a much larger FFD, they can be easily fitted to E-Mount cameras. As long as the adapter holds the lens at the expected FFD, the lens will deliver quality photos.

A Rokkor adapter needs to be exactly 25.5 mm thick. This distance added to the ‘s built-in 18mm will suspend the lens at exactly at 43.50. This will allow the lens to focus perfectly at infinity.

Obviously, an A-Mount adapter will need to be 26.5 mm thick, in order to hold the lens at the required 44.5 mm distance from the film plane.

Thanks to the E-mount’s Thin FFD, it is easy to retrofit most lenses

You Cannot have a Negative Flange Focalplane Distance

Things get trickier when you attempt adapting lenses designed for a smaller FFD to a camera with a thicker FFD. You can’t very well design an adapter to have a negative FFD. The lens would have to move inside the lens mount.

A classic example would be adapting a Rokkor lens to an A-Mount camera. No matter how you configure it, there is no way the Rokkor SR Mount can project a sharp image onto the A-Mount’s film plane. Even if you could design an adapter with zero thickness, the Rokkor lens would project a sharp image at 43.5mm, but the A-Mount’s film plane is located at 44.5. The result would be soft images when focusing at infinity.

The only practical solution is to add an additional lens element inside the adapter. This extra lens refocuses the light path from the Rokkor lens so it projects the image correctly at exactly 44.50 mm.

Naturally, adding a new lens element could affect image quality. Although the additional element does not have the same lens coating as the original Minolta lens, I have not encountered any serious quality issues with the MD to A-Mount adapters that I have used.

Most adapters are built and sold by small third-party manufacturers. These firms may or may not have the ability to design an internal lens that measures up to the quality of the lens you are attempting to adapt.

One final note about Rokkor to A-Mount adapters. The internal lens is only required when you need to focus at infinity. You can encounter adapters without the internal lens; often these are marketed as “glassless” adapters. These will most likely give you soft images at infinity, but they will allow you to do excellent macro and close-up work.

Just to be clear, the preceding several paragraphs only apply to Rokkor to A-Mount adapters. Adapting 35mm lenses to E-Mount cameras does not require any added lens elements.

Because of the large FFD of various dSLR lens lines, you should be able to find an E-Mount adapter for almost any vintage 35mm lens. These lenses cover a full 35 mm film area, so they can be used on both the full-frame A7 series as well as the APS-C A6000 and NEX cameras.

The thrust of this post is aimed at explaining Flange Focal Distance and how it impacts adapting lenses from one camera to another. This article does not explore autofocus adapters or focal reducers that will modify a lens’ effective focal length. I will discuss those advanced adapters in a future post.