How does a twelve-year-old dSLR compare to the modern crop of mirrorless cameras? This time around, I will be comparing a dSLR from 2008 to a modern Evil camera. Spoiler alert, unlike the movies, Evil wins this one.

While creating sample images for my Rokkor 58mm f/1.4 review, I found myself shooting test shots of a high-energy worship service with my aging Sony A350 dSLR.

Trying to focus in the faint light proved quite challenging. I recall obtaining excellent photos with this camera in the past. Same camera, same lighting conditions. The images from 2010 were sharp and clear. Why did I have so much difficulty in 2022?

Then I realized that when I shot with the A350 a decade ago, my lenses of choice were Minolta A-Mount autofocus lenses. Sporadically, I would use an adapter to mount one of my old Rokkor lenses. But generally, I would only break out the Rokkors in good lighting. When the lighting started to fade, I would switch back to an autofocus lens.

The rise of the E-Mount and EVF

I bought my first E-Mount camera, a Sony NEX-5n, in 2012. I never expected it would become my primary camera.  I had no idea at the time that the E-Mount mirrorless designs would eventually evolve into Sony’s top-of-the-line cameras.

My idea was to experiment with the new mount. I was especially keen on reusing my old Rokkor lenses on the new “evil” camera.

Fast forward ten years and I couldn’t recall when I‘d last used a dSLR, including the A350. I have nothing against dSLRs, but mirrorless cameras are much more useful, especially when using my old manual-focus Rokkors.

Why an Electronic Viewfinder (EVF) is More Desirable for Manual Focus Lenses.

My current main camera is the Sony A7s and I carry an A6000 as a backup. Thanks to the Electronic Viewfinder on both, I can easily compose and focus with all of my old manual-focus lenses, even in poorly lit situations.

I have customized a button on my mirrorless cameras to instantly magnify the preview in the viewfinder. This allows me to effortlessly rack the focus to obtain needlelike sharpness. Focus peaking is always enabled as well. The combination of magnification and focus peaking makes my ancient Rokkors compare very favorably with modern lenses.

It is second nature for me to use these EV tools to obtain great results. The fact the EV can also increase the brightness of the preview is another major advantage in murky light.

I had forgotten just how much I had depended on these focus aids. It was nearly impossible to focus the A350 in the lackluster illumination.

I truly missed my A7s with its bright, easy-to-magnify electronic viewfinder.

Of course, the A7s, with its high ISO capabilities, provides another major advantage. An ISO of 800 is about the top of the A350‘s useable sensitivity, and I am more comfortable with 400. Image noise is unacceptable at any higher ISO settings. In contrast, with the A7s I can shoot at ISO 3200, confidently knowing noise won’t be a factor.

Of course, a higher ISO won’t affect the brightness in a dSLR viewfinder. But a higher ISO permits extra depth of field, which increases the chances of getting the subject in decent focus.

I struggled to get acceptable photos with the A350 in the meager light available to me. With the A7s, I can magnify the focus to clearly discern details such as eyelashes and fine hairs. The lack of light in the auditorium made it next to impossible to find focus with the A350.

I don’t remember ever being as frustrated as a photographer as I was that day. Attempting to make adequate images with my manual focus lens was a discouraging ordeal. It was especially dishearting to capture a stunning facial expression only to discover the overall image was shapelessly soft.

As you might expect, I saw a huge decrease in the number of satisfactory shots taken with the dSLR. Once I imported them onto my computer, a disappointingly high number of the images just missed being acceptable. My eyes hurt as they tried to resolve edges that were almost, but not quite, sharp.

I was able to salvage a handful of photos. Some were actually in sharp focus, more by luck than skill. I was able to manipulate some of the near-misses into tolerable photographs using Lightroom’s Sharpening and Noise Reduction filters. I trashed most of the rest.

You shouldn’t interpret this as a blanket condemnation of using an adapter to mount Rokkor images on older dSLRs. I captured a number of tack-sharp photos in good light. It was only when the light started to fade that the number of acceptable results from the A350/Rokkor combination faded as well.

In the current digital camera landscape, the A350 is a dinosaur. It is still usable, but its capabilities are easily outstripped by any modern dSLR. Even so, I suspect that the latest ground-glass and mirror cameras would struggle with manual focusing in mediocre light. When it comes to seeing in the dark, dSLRs cannot compete with modern electronic viewfinders.

I am still a big proponent of shooting with classic manual focus lenses on modern cameras. A-mount dSLRs are tricker because the Rokkor adapter requires an extra internal lens element. But that hasn’t stopped me from creating lovely images with this combination. 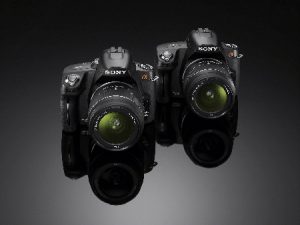