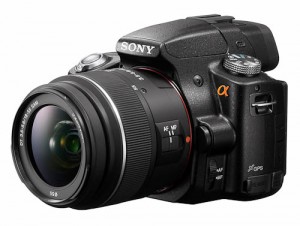 Aug 23, 2010 Sony Alpha cameras are in the news in a big way, thanks to a flurry of announcements about their high-end dSLR and Translucent Mirror cameras.

Translucent what? Sony has announced the A55 and A33 cameras, which look like conventional dSLRs…but are actually a form of Pellix Mirror cameras.

Although the concept of a Pellix or half-mirror camera has been around for decades, Sony has adapted the translucent mirror concept to a modern electronic viewfinder to create a whole new animal.

The implications of utilizing this system in the Sony Alpha are quite exciting. The biggest benefit involves shooting video, since the Pellix technology allows the camera to maintain fast autofocus while shooting, eliminating a limitation that plagues dSLR video cameras from other manufacturers.

The translucent mirror uses beam-spliting technology to direct some light to the focusing sensor, while the rest of the light passes directly through the mirror to the imaging capture sensor. Thus the A55 and A33 can use fast phase-detection auto focus, even when shooting video.

To date other most other dSLRs handle the focusing issue by not offering auto focusing at all, or using slower Passive autofocus.

While I suspect that solving video issues is the main reason Sony has chosen to go down this road, there are several other advantages that photographers can look forward to in Sony Alpha translucent mirror cameras.

Because the mirror doesn’t need to flip up for each shot, the cameras is able to deliver faster frame rates. In the 1970s, Canon produced a high-speed motor-driven version of the F1 film SLR equipped with a pellix mirror. It was specifically aimed at sports and technical photographers looking for high-speed capture.

Because of the non-moving, translucent mirror, the Sony A55 can shoot at 10fps, an outstanding frame rate for a dSLR priced under $800. (US price is $749.)

Secondly, the Pelilx camera should be much quieter. Typically, shutter noise isn’t a big issue, but there are times when the noise generated by that flipping mirror can be objectionable. Shutter noise can negatively impact wedding ceremonies, speeches, training classes, undercover surveillance, wildlife photo shoots and other quiet events. I love shooting with my Sony Alpha dSLRs, but I keep an old Minolta Dimage 7i around because it can shoot in absolute silence. I don’t use it often, but I have captured images I never would have gotten because of the noise of a conventional SLR or dSLR would have interrupted the proceedings.

Before you get too enamored about the translucent system, there are good reasons you don’t see too many Pellix cameras on the market.

First that beam-splitting technology means the sensor and viewfinder have to share the available light. In bright sunlight it isn’t a problem, but as the illumination fades, any light reflected to the viewfinder must be subtracted from the light falling on the sensor. As a result, Pellix cameras are not known for their stellar low-light performance.

Sony has solved this problem by replacing the conventional optical viewfinder with an electronic viewfinder (EVF). (There is also a live-view LCD on the back.)

When you look through the eye-piece on a Alpha A55 or A33, you will actually be looking an electronic viewfinder — a feature the aforementioned DiMage 7i offered a decade or so ago. There is one big difference. The EVF in the old 7i was prone to smearing if the camera or subject moved quickly. I haven’t yet had a chance to play with a A55 or A33, but the newer EVF cameras I’ve used recently rival an optical viewfinder in refresh speed. Hopefully the new Sony models will have a similar high-performance EVF.

Because the EVF can amplify the signal in the viewfinder, we can expect that the view from the finder in the new cameras will be bright and clear in dim light, something that could not be said about old-scholl half-mirror cameras.

Since pellix style camera actually shoot through the mirror, however, crud on the mirror could reduce image quality.

I have no experience with pellix mirrors, but I am told that they are usually quite delicate. Will it be easy to keep the translucent mirror dust-free? Is the mirror easy to clean? Only time will tell.

I’m quite excited by the new Translucent cameras, and might just pickup one of these in the near future. Of course there are other items that must be budgeted for. Sony has also announced two new conventional dSLRs (with video capabilities) and three new lenses. I’ll discuss those in my next post.

These are the body-only prices. The A55 and A33 use the complete range of Sony and Minolta A-Mount lenses.