Skip to content
If you are experiencing frequent data loss with a memory card, it is time to replace it. There are however, a few things you can try to restore a card's reliability.

I got a recent comment that basically asked how often you can reuse a memory card:

How many times can you erase and reuse a CF card? I have been having trouble with a card I have deleting images or corrupting images on occasion. I am curious if the CF card is just a bad card, or if I have simply erased and reused it too many times. Any suggestions?

I have used a variety of Memory Cards over the past decade and a half. I never heard of a card wearing out from use. The Compact Flash Association claims that in typical usage, a Compact Flash card can be used for more than 100 years with no loss or deterioration of data.

I’m not sure what the association considers â€œtypical use,â€ but my cards get reused often, usually several times a week. I haven’t experienced a failure with cards based on flash memory. I have had an old IBM Mircodrive fail on me, but that unit used mechanical hard drive technology, not flash storage.

Although I do own a few Memory Sticks and a micro SD card, all of my dSLR work is captured on various flavors of Compact Flash cards, so I really can’t comment on other forms of memory.

My CF cards are so reliable that I take them for granted. In the past, I did have to occasionally resort to using photo recovery software to retrieve images from a card the computer could not read. But that was years ago. I honestly can’t remember the last time I had a problem with a card.

I don’t use my older cards very much, but that is only because they have a smaller capacity then my newer cards. Sometimes, if I have to quick product shoot for Alphatracks, I may use my ancient Viking 256mb card, which continues to work flawlessly, despite it’s age. For normal, everyday shooting, however, I prefer to use my 4 or 8 GB cards. But all my old CF cards are still functional, even after years of heavy use.

So the answer is that I don’t think you can wear out a memory card just be erasing and reusing it; at least not in either of our lifetimes.

Having said that, that doesn’t mean that memory cars are indestructible. Damage, manufacturing defects and careless handling can cause an individual card to go bad. If you are experiencing frequent data loss with a particular card, I would discontinue using it. Memory cards have become quite affordable, so it doesn’t make sense to risk capturing your precious images to a memory card that might be corrupt.

Before discarding the card, you could try reformatting it. All digital cameras offer the option to either erase or format memory cards. When you simply erase images, the images are removed from the card’s directory, but the data remains on the card until it is overwritten. The card’s file system and directory are untouched. If something corrupted the file system, or bad data is stored somewhere on the card, that corruption will remain even after erasing the card.

Formating wipes all the data from the card and installs a shiny new file system. It tales slightly more time and it removes all the data even if it is marked protected. Most cameras allow you to protect images on a card so they cannot be accidentally erased. Formatting ignores any protection and eliminates everything. So if I had an unreliable memory card, the first thing I would do is reformat it.

I don’t know how experienced you are or how you handle your memory cards. The following suggestions are fairly common knowledge and you may already know about these precautions. For what it’s worth, I will include them here as for those who need a refresher course on the care and feeding of their camera’s storage memory.

Always turn your camera off when removing or inserting a card. Removing or adding a card in a live camera can cause electrical arcs that can cause data loss.

Take care of your cards. Don’t throw them loose in your camera bag or pocket. Get a protective case and store your cards in the case when they are not in use.

Don’t fill your memory cards to capacity. With a fresh card, your camera is free to write data anywhere it wishes in all that empty space. As the card becomes filled, however, the camera needs to shoehorn new data into out-of-the-way locations on the card. There is a greater potential of data corruption with a card crowded with images.

Don’t erase or format the card from the computer, always use the camera’s own erase and format controls. I learned this tip when I started using memory cards, and I have never deviated from it. Many software programs do offer the ability to erase the card after you upload images. The way I see it, computers have a more complex file system than a dSLR, as they need to read a variety of disk formats, including CDs, DVDs and file servers. In contrast, your camera only has to read and write to a single device: a memory card. This means your dSLR is probably more precise than your computer when writing to a card. So you can avoid glitches by letting your camera format the card exactly the way it expects to store the data.

Buy top quality cards. As I mentioned, the prices of memory cards continue to fall, so it makes little sense to try to save money by buying a no-name card. Watch for sales and buy SanDisk, Lexar, Sony or other brand name cards.

I hope this helps. If formating doesn’t make the card reliable, I would stop using it immediately. New cards are inexpensive, so there is no need to play Russian-roulette with your precious images!

5 thoughts on “Can you Wear Out a Memory Card?” 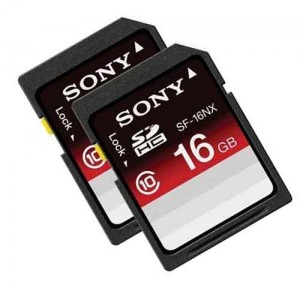 Compact Flash cards: stock up while the deals are good