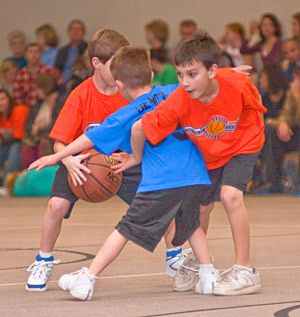 Sports photography is breed apart. In most forms of photography the photographer takes his or her time, carefully adjusting the lighting and arranging the scene to capture the perfect image.

It’s different for sport shooters. Covering action sports leaves little room for careful composition or lengthy setup. If the participants are constantly moving, the photographer needs to be on the move as well. Shooting fast action outdoors in daylight is difficult enough. Shooting sports indoors or after dark becomes more complex, because you are faced with the problem of finding enough light to stop the action. Dim light and fast shutter speeds are usually polar opposites. If you are going capture sharp action images indoors at a reasonable ISO setting, a fast lens becomes mandatory.

You gotta have fast glass

I was reminded of this when I set out to photograph my grandson’s youth basketball team. I realized that all of my zoom telephotos were too slow to capture indoor sports at ISO 400 or even ISO 800. My Minolta 70-210 Beercan is great for outdoor sports, but with a maximum aperture of f/4, you need to raise the ISO to 1600 to stop indoor action. The same for all my other telephotos. Although I have a nice selection of focal lengths, most of my lenses are too slow for indoor sports, with the exception of my Minolta 50mm f/1.7. While the nifty fifty is fast enough, the 50mm reach is too short to get in tight on the players.

Of course both the Sony and Minolta lens lines offer many excellent, fast optics. You can also obtain fast glass from third party lens makers such as Tamron, Sigma and others.

A fast telephoto is a joy to shoot with, but wide aperture optics involve consequences. First they are usually expensive, and secondly they are typically bulky and heavy. I don’t mind the weight when I am shooting, because it helps dampen vibration. However, carrying around a bag of heavy lenses gets old really fast.

This means that when I want to travel light (which is most of the time) the heavy, fast glass stays home. The most expensive lenses are the ones that get used the least.

That’s why I wasn’t too interested in laying out the cash for a fast AF zoom. I’m sure that a fast Carl Zeiss or a Sony G lens would be exciting to shoot with, but I can’t justify the price tag for a hunk of glass that I will only use on limited occasions.

Still, I needed something faster than a f/4 telephoto. In casting around for a solution, I stumbled across a long forgotten favorite — a second-hand, but little used Vivitar M42 screw mount 135mm f2.8 lens.

I was very familiar with this lens, because the the first axillary lens I ever owned was a near twin in the Minolta X mount. It was fast, light and very easy to handle. I bought it in the mid seventies, and used the lens extensively for more than a decade. I would probably still have it, but some low-life broke into our home and stole a bunch of camera equipment, including the 135. 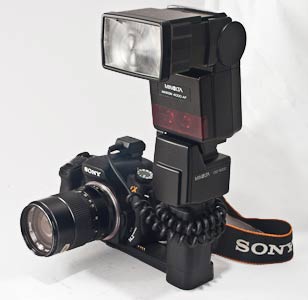 Here’s the inexpensive Vivitar M42 lens and Minolta 4000AF flash mounted on the Sony A350. Note the Control Grip 1000 that serves as a flash bracket.

I wasn’t seeking this particular lens, but when I found a Vivitar 135 M42 mount on eBay, I realized this could be an excellent lens for indoor sports. With the APS-C crop sensor on the Sony A350, the 135 represents a 192mm equivalent. A 200mm f/2.8 lens, with good image quality and a price of less then $30? I didn’t see how I could go very far wrong with that deal. The fact that I already had a M42 to Minolta A mount adapter made it that much sweeter.

My initial tests with the 135mm were good, but I decided I needed to add little kick by adding light from a flash. This immediately calls into question the whole idea of using the f/2.8 lens. If you are going to shoot with a flash, why not use the beercan or one of my other f/4 lenses. Surely it wouldn’t be difficult to find a flash that could fully light the players at f/4?

Do you really need a fast lens if you are going to use a flash?

The truth is that at f/4 and ISO 400, anything outside the flash range turns dark. It looks like the team is playing basketball inside a coal mine; or at least in a auditorium whose owners forgot to pay the electric bill. You can “drag the shutter” by shooting at a slower shutter speed, which will relieve the dark background. But if there is enough ambient light, motion steaks in the highlights becomes visible. With a fast lens, I can use a fast shutter speed to freeze the action while the f/2.8 aperture keeps the background nice and bright.

I could have used my Sony HLV-F42AM dedicated flash. Instead, I chose to go with another old relic — a Minolta 4000AF flash.

Common wisdom states that the older Minolta flashes don’t work well with the dSLRS from Sony or Minolta. In this case, common wisdom is way off base. The 4000AF can be made to work very well on the Sony Alpha. It is true the 4000AF won’t work as a dedicated flash on the Sony Alpha. You need to shoot with the flash in the manual mode and you have to tweak the power settings to match the conditions. But it works quite well if you know what you are doing.

I chose the 4000AF because I got a nice deal on a Minolta Control Grip CG-1000 Set and a 4000AF. This allowed me to mount the flash on the CG bracket and use the Sony FA-CC1AM Alpha Off-Camera sync cord to trigger the flash. This combination is far better balanced than shooting with the HLV-F42AM on the hot shoe.

The 4000AF is a powerful flash, so I bounce the flash off the ceiling, Somewhat surprisingly, even though the auditorium ceiling is at least 35 feet above the camera, at ISO 400 bounce lighting from the 4000AF is more than sufficient to fully light the players.

For indoor action, this combination is hard to beat

I intend to follow up the Vivitar 135 report with a second report exploring how to use the 4000AF with the Sony Alpha.

You may wonder just how well this primitive equipment works for shooting indoor sports with a dSLR. The answer is very well indeed. The images look awesome. The telephoto can isolate the emotion on the faces of individual players, and the bounce flash creates wonderful, shadow free lighting.

To shoot in a wide variety of lighting conditions, there is no doubt that a CZ or G lens would offer superior performance. Indoors, under constant lighting, an old M42 lens can easily hold its own against the much better AF lenses. With a little practice and effort, you can create images that look every bit as good at a fraction of the cost.

Stick around. This is going to be interesting.

9 thoughts on “Photographing basketball on the cheap”