I just completed shooting the Hooftober event at Bit of Hope Ranch. This was a complex event, in part because I was asked to shoot both stills and video. It also required shooting a reader’s theater on stage, as well as numerous spooky attractions along the miles of trails at the ranch. Because the theme was the Legend of Sleepy Hollow, almost everything needed to be shot in the dark.

About Bit Of Hope Ranch

Bit of Hope Ranch is a horse therapy organization which is aimed at helping “at risk” children and teens. The ranch’s mission statement is “Reach, Rescue and Restore broken children, families and horses through programs that build mind, body and spirit.” As the statement implies, in addition to helping children, the ranch’s volunteers are heavily involved in rescuing abused and neglected animals. The non-profit organization, which is located in Gaston County, is celebrating it’s fifth year of operation.

As I was tasked with capturing both video and still images, I used multiple cameras. Most of the stills were shot with my trusty Sony A350. I used a flash and bracket to capture some of the images, but to enhance the spooky nature of the event, I used a monopod, which allowed me to grab some interesting time exposures.

My primary video recording rig was a Sony NEX 5N. Because the NEX 5N has better high ISO performance than the A350, I also used the mirrorless camera for some still images. One of the drawbacks to the 5N i that it lacks a eye-level viewfinder. In this case, with almost all of all of the shooting happening after dark, there was no problem focusing and composing on the NEX-5N’s big LCD screen. Because I was shooting video and long exposures, the NEX-5N spent the entire event bolted to a tripod.

I also brought along the Zoom H1 audio recorder, which allowed me to capture audio to be used in videos and slide shows.

Of course, in any assignment of this nature, it is crucial to have back up items. In my case, a back up flash unit proved crucial, as my main flash developed a problem and was unusable. Without a backup, I would have been in trouble.

I also needed a number of memory cards and extra batteries. The NEX 5N can use either SD cards or Sony Memory Sticks. I filled up my SD Memory and had to rely on a old Memory Stick from the past. Thankfully, it worked well and gave me an extra 4GB of storage for video files. 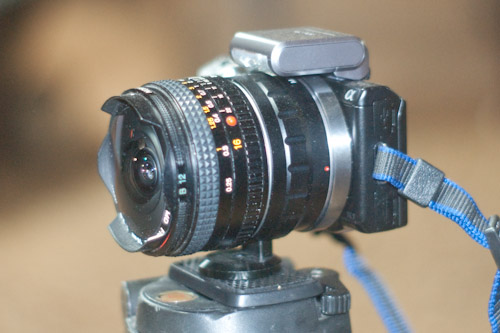 Shooting in the Dark

I have considerable experience shooting in the dark. Back when I was a full-time magazine photographer, I covered numerous SCCS Pro Rallies, including several running of the famous Press on Regardless in Michigan’s Upper Peninsula. It takes special techniques to bring back usable images from the north woods at 3AM while you are miles away from any city. Those same techniques helped me collect some nice photos from the Hooftober event

My suggestions for shooting an event like Hooftober (or your local Halloween events) involve:

I shot some stills with the 5N, because I was comfortable with the high ISO performance. The ISO was even more critical for my video work, since I was working without a video light. In very dim light, the image in the view finder often looked great, but as soon as I pressed the video button, the image would turn dark and muddy. That was my cue to push up the ISO for video, as the camera could capture stills at a lower ISO than video.

One of the things I learned in this type of shooting is to travel light. I am not referring to the weight of my camera equipment. I have found it is all too easy to lose things while you are flaiing around in the dark woods at night. To that end, I take only essential items and leave any unnecessary stuff behind.

The same concern for memory cards applies to uploading everything to my computer. The following day I made sure everything was safely uploaded and backed up. This involved uploading Compact Flash, SD Cards, Memory Sticks and a micro SD memory card from the Zoom H1 recorder. I was careful to organize my stills, video and audio where I could find everything. Some of the files had the same file name, which presents the danger of one file overwriting another. I was careful to download each card to it’s own folder, eliminating the risk of overwriting another file.

The final step is to prepare everything for the next shoot.

You may may not be shooting in the deep woods, but my experiences at Hooftober can apply to any Halloween party — or even simply shooting the trick and treaters that appear at your front door.

A foggy Christmas at the Billy Graham Library