Second only to questions about vertical grips for the Sony Alpha A100, the most numerous Alphatracks searches involve lenses. Questions like “Can I use old Minolta lenses on Sony A100?” are frequent. Intriguingly, I have even gotten questions like “Will my new Sony lenses fit on my dad’s old X700?”

Confusion reigns when photographers, especially those new to the dSLR scene, attempt to sort out which Minolta lenses fit which camera. Minolta produced SLR lenses from the 1950s until 2006 — and Sony is still selling re-branded versions of some of the more popular Minolta glass. That is a heck of a lot of lenses. Those new to the world of SLRs hear that the A100 will accept Minolta lenses, so they can be forgiven if they expect an old MC lens from 1972 to attach to the A100. Conversely, there are brand new A100 owners who are doubtful that recent A-mount Minolta lenses will work on their camera.

This will be a three part series focusing on lens options for Minolta SLRs, as well as the KM and Sony dSLRs. I’m not going to explore any particular lens — instead I will delve into the different lens mounts and attempt to dispel some of the confusion.

First up, the Rokkor SR, MC and MD lenses. 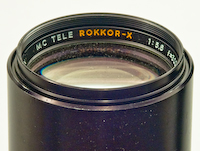 Minolta — or at least the company we know as Minolta — had a long history producing cameras long before the era of SLRs. After making a variety of rangefinders and the famous Autocord Minolta the the plunge and entered the SLR ranks. The first Minolta SLR, oddly enough, was known as the the SR2, even though it was released before the SR1 model.

Both these SLRs introduced the Minolta designed, three blade bayonet mount. Introduced in 1958, the Minolta mount was superior to most competing contemporary SLR lens mounts. At the time, many competitors still relied on the old-style screw mount. Most SLR makers ended up redesigning their lens mounts to keep up with technology — but the Minolta mount was so well designed that the camera maker was able to consistently update their technology while still keeping backwards and forwards compatibility between cameras and lenses.

The original SR mount lenses were “stop-down” lenses, meaning you had to manually close down the lens to the aperture you wanted. In theory you would focus wide-open, then stop the lens down to make an exposure.

By the time the Minolta SR7 arrived is 1962, Minolta and others had figured out ways to allow the camera to automatically stop the lens down to the correct f-stop. In Minolta’s case, you could focus wide open, then when you pressed the shutter, a rod would cause the lens to close down to the f-stop you had set. As soon as the exposure was finished, the lens would open up again to provide a bright view finder.

The first “MC” lens appeared with the original SRT101 in 1966. This was the first SLR to offer through-the-lens metering. Minolta added a tab to the lens to allow the camera to tell which f-stop the photographer had set. Minolta dubbed these lenses MC for “meter-coupled.” It utilized the same SR lens-mount — but the MC lenses had the extra tab. 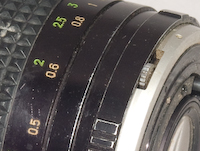 Many MC lenses featured a depth of field preview button. It was redunant, because nearly every Mnolta SLR of the era featued a DOF preview. The DOF lever disappeared from the MD lenses.

It is important to understand that, despite the rapid change and improvements, virtually all Minolta lenses would fit on any Minolta SLR. Of course you needed a MC lens if you wanted to meter with an SRT, but you could use the older SR lenses in manual mode on the SRT. At the same time, you could use a MC lens on a SR series camera with no side effects. There wee a couple of very specialized lenses that might need slight modifications to work properly, but virtually all SR and MC lenses were fully interchangeable.

This happy state of affairs continued as Minolta introduced the improved SRT102. I don’t have any accurate production figures, but in the mid-seventies, Minolta claimed their main lens factory was cranking out 40,000 lenses a month. Add in specialty lenses produced elsewhere, and it appears Minolta was producing nearly a half million MC lenses per year. 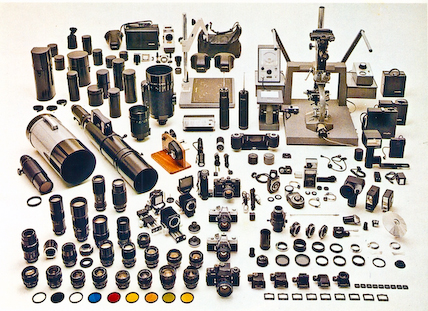 The Minolta SLR system, circa 1975. Taken from an old Minolta marketing piece, this probably shows the Rokkor-X lens lineup, as the XK, the SRT 102, the SRT 101 and the SRM motordriven camera are shown. The XK used Rokkor X (MC) lenses. The MD lenses wouldn’t be introduced for another two years. Sadly, with the exception of the filters, copy stands and ambient light meters, almost nothing shown in this photo can be used directly on any current dSLR.

1973 saw the first Minolta with an electronic shutter, the legendary (and expensive) XK. This was followed up quickly with the more affordable XE-7 and XE-5. All three of these cameras offered a new option for Minolta shooters. In addition to shooting manually (the only option with previous Minolta SLRs), the new X series camera now offered an aperture priority setting. A photographer could select an f-stop and the camera would set a shutter speed that would provide the proper exposure. The Minolta engineers were able to make this work with no changes to the MC lens mount. So once again you could use all Minolta lenses on the new cameras in manual mode. If you wanted to use aperture priority, you needed an MC lens.

At first, I was a little disappointed that my new XE-7 only offered aperture priority since I was shooting auto racing full time and a fast shutter speed was of major importance to me. I quickly found out that I was worrying about nothing, as I could just rack the aperture ring back and forth to cause the camera to set the shutter speed I wanted. Still, at the tme, I didn’t understand why Minolta didn’t offer a shutter priority option. The reason was simple. The camera had no way to adjust the aperture with an MC lens. So you couldn’t select a shutter speed and have the camera set the aperture to the correct exposure. 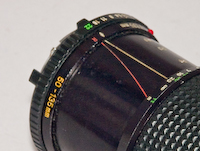 The two tabs on the aperature ring indicate this is a MD lens. The first tab is located near the green f22 marking, while the MD tab can be seen near the orange 50-135 marking.

Always thinking toward the future, the Minolta engineers solved the shutter priority puzzle in 1977, They released the XD-11 — the world’s first SLR that offered a choice of either Aperture or Shutter priority (as well as manual) modes. In order to bring off this magic, however, they had to make a slight change to Minolta lenses. Nothing drastic. Just a small tab added to the aperture ring. With this small change the XD-11 and subsequent X700 variants could stop down or open the lens when in shutter priority mode. Since this lens was designed for a dual mode camera, Minolta adopted the name MD for these dual mode lenses.

The original SR lens mount was now nearly twenty years old, but full compatibility was still maintained. You could attach the new MD lenses to an old SR2 or you could use any old SR or MC lenses on your new XD-11. Of course you couldn’t use the old lenses in shutter priority mode, but you still could shoot in aperture priority or manually.

The X700, released in 1981, was Minolta’s first Program mode camera — it could set both f-stop and shutter speed when in the program setting. This required no changes to the lens mount or lenses. You could use any MD lens in program mode. You could still use the older lens as well — with the same aperture or manual limitation.

Finally, in 1985, advances in camera design finally caught up with the famed Minolta lens mount. That year, Minolta introduced a full system of automatic focusing cameras. It was a major advancement, and placed Minolta well ahead of all other camera makers. To bring this off, however, Minolta had to drastically redesign their lens mount for the first time. Even the wizards at Minolta couldn’t find enough space in the X-mount to incorporate autofocus. 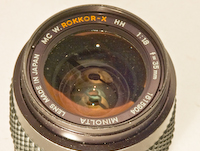 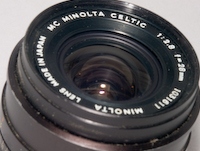 Almost all of the original Minolta lenses were identified as Auto Rokkor while the MC lenses carry the legend Rokkor-X. The early MD lenses also carried the Rokkor-X designation, but the name disappeared along the way. Even Minolta’s economy Celtic line carried the MC marking.

The new Maxxum A-mount spelled the end of backwards compatibility. The X-mount lens opening was too small to allow for the various sensors and contacts required for the electronic focusing components. So the A-mount was born, with a larger opening and electronic connections to replace many of the X-mount’s mechanical workings. The two mounts look similar, but the lenses are not interchangeable between the systems.

That means you cannot use a timeline to identify whether a lens will fit the A-mount dSLRs. A Minolta lens purchased in, say 1996, is probably a A-mount, but could very possibly be an X-mount.

In addition, that also means that there is a huge amount of older SR, MC and MD glass out there, some of it fairly new. No wonder there is so much interest in using these great old lenses on modern dSLRs.

There are options to use the Rokkor lenses on the A-mount and other cameras — with some severe restrictions. We’ll discuss that in part three. Before we get into that, however, we need to explore Minolta’s (and Sony’s) A-mount lenses.

While I used my own experience and my collection of old Minolta literature to assemble this article, I did use some other Minolta-related websites to check some facts and dates. If you want to delve deeper into Minolta manual lenses, try Minman at http://members.aol.com/manualminolta/. You’ll find a wealth of information about manual-focus Minolta cameras and lenses. Another excellent source is Peter Blaise Monahon’s website at http://www.geocities.com/peterblaise/minoltamf/. Either of these sites should provide you with all the info you want on the SR, MD and MC lenses.

Next time we will look at the A-mount and which Minolta lenses fit the Alpha dSLRs.

15 thoughts on “Rokkor lenses: bedrock of the Minolta SLR legacy”