Naturally, there is a huge amount of speculation about the Sony Alpha DSLR concept mockups. I was interested to see that many commentators seem to have overlooked one of the more important features of the concept cameras.

Sure, the concepts are shown with an interesting vertical grip, some apparent changes to the lens mount and some intriguing hinged covers. But what caught my eye – besides that dramatic pentaprism on the flagship model – was the PC flash sync on the camera’s left side, just below the camera strap swivel. Both models feature the sync port, behind a knob shaped cover that features a stylized lighting bolt. This means that the new upgraded Alphas, unlike the A100 and the Minolta 5D, will at last offer a PC sync port

Just so we understand, PC Sync has nothing to do with a personal computer. Cameras sported PC sync ports long before Bill Gates entered kindergarten. In its most simple form, a PC sync port allows the camera to fire a flash through a sync cord. This becomes immensely important when you want to shoot with studio lighting or use non-dedicated flash units.

Personally, I think selling a DSLR without a PC Sync port should be a federal offense, punishable by heavy fines and a long jail sentence. OK, maybe that’s a little harsh, but it is almost that important.

There was a time you would have needed to look long and hard to find a SLR without a PC sync port. If you did find such an animal, you could bet it would be a bargain basement, knockoff that no true photographer would admit to owning. Any true SLR had at least one sync port. Most of the early Minolta SLRs featured two ports – an X sync and a FP Sync. Later they switched to a single port with a switch that allowed the photographer to select the type of sync port.

The missing PC Sync: the revenge of the bean counters

Then in the late ’70s, the boom in consumer SLRs began. Prior to that, almost all SLRs were purchased by professionals or serious amateurs. With the advent of electronic shutters and computerized exposure systems, casual shooters started to gravitate to lower priced SLRs. All of the major camera makers started to produce SLRs for this influx of informal users. The market became incredibly completive as prices dropped like a rock on intro-level SLRs. None of the companies were making much money on these low-end SLRs, but each manufacturer introduced budget priced automatic cameras hoping to make a residual profit on lenses, flash units and the like.

In such a climate, features considered standard on any self respecting SLR were tossed out the window. First to go were metal bodies and glass focusing screens – plastic was more than good enough for this market. Mirror lock-up? Depth of Field Preview? Everyday shooters didn’t need that kind of stuff.

When manufacturers saw their profit drop to pennies on each low-end SLR body they sold, they continued to look for ways to slash costs. Imagine some sharp-eyed bean-counter who wouldn’t know the difference between an original Ansel Adams print and his first grader’s refrigerator art suddenly spotting that innocent PC sync port on the side of the camera.

“What’s that little thing do? Remote flash huh? Why would anyone need that? The hotshoe ought to be good enough for anyone.” 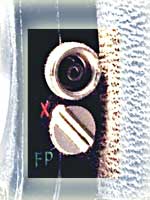 So with a stroke of pen, the camera maker saves twelve cents manufacturing cost on the camera and the photographer looses the ability to use a large amount of studio flash equipment and the like.

The Minolta hotshoe â€” superior, but limited in numbers

If a pc-sync terminal is important on any film or digital SLR, it is doubly important on Minolta and Sony models. Why? Because of the advanced hotshoe utilized by the Sony A100 and all recent era Minolta film and digital cameras.

There is nothing inherently wrong about the Minolta flash shoe – in fact it is a major improvement over all other flash shoes. I have a box full of old flash units with broken feet. They foot broke after frequent attempts to slide the flash in and out of the standard camera hotshoe. At the same time, I remember having at least one flash that was so loose in the flash shoe that it wobbled and would often fail to fire because the contacts didn’t correctly engage the shoe.

The revamped Minolta hotshoe design eliminated both of these problems. The flash attaches with a satisfying “click.” When you want to remove it, you depress a button and the flash unit slides off smoothly. It is undoubtedly the Cadillac of hotshoes and nothing offered by the competition compares with the Minolta shoe.

One drawback to the advanced hotshoe design, however, is that there are millions of flash units, triggers and other hotshoe accessories that will only attach to the old style hotshoe. You can’t attach these items to the Minolta shoe. There are adapters that will allow you to utilize these old flash units with the new shoe, but the adapters are somewhat scarce and hard to find.

If the camera has a PC sync port, the hotshoe design is a non-issue. Simply place the flash on a bracket with an old style flash shoe. Run a sync cord to the camera and you can use almost any flash (in manual mode) with this setup. Providing you have a sync port that is. You also have access to a full range of studio lighting setups.

Lets hope that Sony realizes all this and retains that all important sync port when the new models ship.