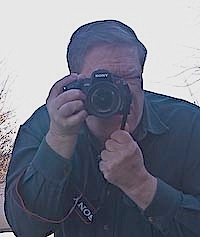 Steady as you go! The amazing strap trick in action.

Tip of the Week This week’s trick concerns a new way to hold your dSLR. It should work with any dSLR or SLR and the best thing is it doesn’t require any extra equipment or expense.

A few weeks back, I was on an outdoor shoot on a large piece of property. I had finished my photography and I passed up the offer of a ride back to my truck, preferring to hike through the woods. Before I set out, someone offered me a glass of Gatorade.

So I started down the trail with the drink in my left hand and carrying my Sony dSLR in my right. I had a strap on the camera, but I let it dangle free and just carried the camera by the grip.

I spotted a squirrel next to the trail and decided it was worth grabbing an image. I had left the A350 on, so I was ready to shoot. Well, almost. My problem was the sports drink.

I figured if I put the drink down on the ground, the squirrel might scamper off. I considered simply dropping the plastic cup, but I feared I would end up with liquid all over my jeans and the impact would scare my quarry away.

The third option would be to steady the lens while still holding the cup with my left hand. But I’ve made enough bone-head mistakes in my life to realize that holding several ounces of sticky red liquid that close to all that pricey electronics was a disaster waiting to happen.

So I concluded the only course of action was to shoot one handed, holding the camera in my right hand and trusting Super Steady Shot to keep the camera and lens from shaking.

As I raised the camera to shoot, the loose strap brushed against my left hand. Without thinking, I wrapped my fingers around the strap and carefully pulled downward. At the same time I kept a steady upward pressure on the camera. I was amazed how steady the camera felt.

Long story short, the squirrel dashed away before I could shoot. But I took several landscape images using the strap trick. I couldn’t believe how steady the the rig made the camera.

Not long after that, I was shooting the the image series inside the Apple Hill general store. When I found I needed to shoot with shutter speeds around 1/10 second, I remembered the strap trick.

This time there was no squirrel or sports drink, but pulling upward against the strap allowed me to shoot at long shutter speeds without shaking.

You can see a sample image taken with this technique at 1/10 second. Super Steady Shot may have been a factor in the image sharpness, but I’m convinced the strap trick contributed to keeping the image sharp.

Some of you may recognize a strong similarity to the ever popular “poor man’s tripod.” I first heard about the poor man’s tripod decades ago. It is apparently still arround, as just this year, I have read about it on at least three blogs and heard it described on two different podcasts.

Basically the idea behind the PMT involves tying a string to a screw inserted into the camera’s tripod mount. You step on the string and pull up on the camera, and the resulting tension keeps the camera steady even at long shutter speeds.

Obviously this strap trick has a lot in common with the PMT. The PMT may offer greater steadiness, since the ground can’t move when you step on the string.

But the strap trick offers some real advantages. The most important thing is that you don’t have to make anything to use the trick. If the strap is already on your camera, you are ready to use it to steady your images. Even if I took the time to make a PMT, (I never have) chances are I wouldn’t have it with me when I needed it. But the strap is usually with me whenever I haul out my cameras.

I haven’t tried this with any really long lenses as yet. I know it works very well with lenses in the 18-85mm range. I intend to try it out with my beercan in the near future, to see how well it works at 210mm.

Why not try it yourself and let me know what you think. As I said in the opener, it won’t cost you anything.