When I first heard the news that Konica-Minolta was suspending their photographic operations, I have to admit that I felt a strange sense of relief. Not that I had any desire to see Minolta go out of business. Itâ€™s just that I was tired of waiting for Minolta to catch-up with other manufacturers.

Although they had several strong performers in the pro-sumer (I hate that name) class of digital cameras, they dragged their feet offering a DSLR. When they finally did, their first offering was twice the price of a Canon Digital Rebel. The 5D finally offered Minolta users the change to buy a DSLR for under a thousand bucks, but it was a long time in coming. Meanwhile Canon continued to offer a virtual smorgasbord of digital equipment. Full-frame sensor â€“ check. Wi-Fi adapter â€“ check. Computer controlled camera operation â€“ check. Low-cost point of entry â€“ check.

In other words, by the time Minolta belatedly offered the 5D, Canon already had a host of attractively priced digital bodies with features that werenâ€™t available on a Minolta DSLR. Yes, I prefer the 7D and 5D â€“ especially the in-camera antishake. — but Canon offered a slew of attractive options. With Minolta â€“ it was always â€œwait until we get around to it.â€

The other disadvantage was Iâ€™m a Mac user and Minolta was never particularly Mac friendly. They did offer Mac software and compatibility, but you always felt that The Mac was seen as a poor stepchild by Minolta. The A2 and A200 could be controlled from a laptop or desktop computer â€“ providing those computers were running Windows. Mac users need not apply. The Mac software they did offer was usually pretty limited. When they got around to offering OSX versions of some of their software, there was no upgrade path for those who had purchased Minolta equipment with Mac OS9 versions of the same software. You want an OSX version? Well you can buy it at full price like everyone else. In contrast, both Canon and Nikon welcomed Mac users with great software and Mac control options.

Finally there is a highly-active Mac-Canon hacker community developing open source Mac software designed to fill-in any weakness in Canonâ€™s own Mac offerings.

So as distressed as I was hearing that Minolta was ceasing camera production â€“ there was a feeling that I was now free to jump onboard the Canon freight train and have everything I needed. No more waiting for Minolta to toss a digital bone to those who waited for them to offer a full range of DSLR offerings. Goodbye Minolta, hello Canon.

The idea of waiting for Sony to produce a DSLR with the Minolta lens mount didnâ€™t even cross my mind. At least not at first. Sony had disgraced itself with the root-kit fiasco only a few months before and while that foolishness didnâ€™t affect Macs â€“ it still showed horrendously poor judgment on Sonyâ€™s part. Besides Canon is a camera company. Sony is an electronic conglomerate – making everything from gaming consoles to walk-men to computers. They have no currency in the high-end still photographic area. So initially I dismissed the idea of a Sony branded DSLR.

As I read some of the press releases and analysis of the situation, however, I realized that Sony was very serious about the DSLR market.

Now I take most press releases with a grain of salt â€“ no one puts out a release that says â€œWe are going to make a half-hearted effort to be successful in this market â€“ but if we donâ€™t succeed in 18 months or so, weâ€™ll drop the project and sell off the inventory at pennies on the dollar.â€ No, they donâ€™t come out and say that, but you know that is the approach that many companies operate under.

The more I thought about it; however, I donâ€™t think this is Sonyâ€™s approach. First, they are late for the party â€“ almost too late. Everybody and their brother is already offering a DLSR in some shape or form â€“ even non-traditional photographic companies like Panasonic and Samsung. It is a very crowded field. So crowded, in fact, that Kodak â€“ the company that pioneered the DSLR â€“ exited the field because they felt it was too difficult to stay competitive.

In face of this, why would Sony stick their foot into the water unless they expected to make a fairly large splash? Whatever else you think about Sony, they are not known for pouring buckets of money into something that doesnâ€™t produce revenue. So if they intend to enter a very crowded field, where profit margins are cut to the bone and where long time photographic companies like Minolta and Kodak have already flown the white flag because they couldnâ€™t earn a profit â€“ they must have a plan.

If you read the press releases, they are expecting not just to enter the DSLR market â€“ they are intending to dominate it.

It doesnâ€™t take a marketing MBA to figure out that you donâ€™t enter an extremely-competitive, razor-thin profit market and expect to gain overwhelming market share unless you have something very good to offer. To accomplish Sonyâ€™s goal, they either will have to offer prices the other players canâ€™t match or produce a DSLR line with features and benefits the competitors donâ€™t have. In fact, to achieve Sonyâ€™s predicted market penetration; they will probably have to offer both the extended features and the low price.

Of course I donâ€™t work for Sony and I donâ€™t have any more information than the next guy. There is a ton of speculation about what Sonyâ€™s offerings will consist of. Opinions Iâ€™ve heard range from a series of cheap,low-end models to a fleet of full-frame sensor, top of the line pro DSLRS that will doom Canon and Nikon to oblivion.

The official release date is supposed to be June 6, 2006. Until then, opinions â€“

and rumors â€“ will continue to proliferate.

2 thoughts on “Will Sony be the new Minola?” 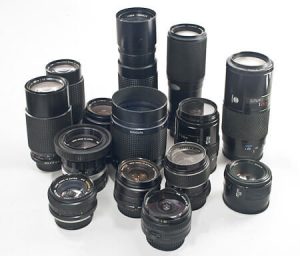