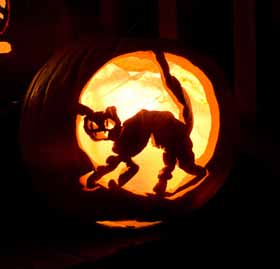 If I had used a flash, it would have killed the mood of this Jack O’ Lantern portrait. You would have seen more of the pumpkin, but the eerie orange light would be lost.

Electronic Flash is a great tool, but it isn’t the answer to every application. Well-lit subjects don’t convey creepy or sinister very well. So you can leave the flash home and welcome the dark shadows and eerie blotches of light you get when you shoot after sundown without artificial light.

As a rule, I like the steadiness of a tripod, but this is a case where a tripod will just get in the way. Do you really want to open up a tripod around a group of excited kids (or young-hearted adults) wandering around wearing masks? The mask reduces vision, making it likely someone will trip over your tripod legs. I don’t think it is worth the hassle or the risk.

If you absolutely have to have some sort of support, you could consider a monopod. I prefer to just use the Steady Shot feature in the Sony Alpha. As long as you use a fairly short focal length, you can get sharp images with Steady Shot at shutter speeds of less than 1/8 second. If your subject moves you’ll see blur, but camera shake won’t be a concern. Once again, you can use the blurring caused by subject movement as a special effect. It’s not a drawback…it is art!

You can also try deliberately moving the camera during long exposures to exaggerate light streaks. If your subjects are carrying flash lights or light sticks, there is the ever popular technique of light writing. Take a long exposure and swing the lights to create light trails by drawing in the dark.

Whose afraid of noise?

I’m usually conservative about ISO and I normally avoid the higher ISO ranges. High ISO generates noise, so I use whatever techniques I can to keep a moderate ISO setting. I think this is one time when I might abandon that caution and crank the ISO up to the max. While I don’t watch many horror films, I’ve seen the previews of recent films of this genre. Ever since the Blair Witch Project, Hollywood films have appeared with obvious film grain, bad lighting, jerky camera work and severe vignetting. Why not join this trend (just for one night) and capitalize on high ISO and maximum noise?

I’m not recommending that you shoot all your Halloween images at ISO 3200, but as a creative effect, exaggerated noise might set some of your images apart.

Since we are breaking rules, throw out the idea of seeing everything in your images. Alfred Hitchcock was a master of this. He would only show you part of something. The scary parts would be hidden in the shadows. You couldn’t see anything, but there was…something. You didn’t know exactly what was there, but the hair on your neck started tingling anyways.

You can use this same technique with your still photography. Reveal only part of a scary costume, hiding much of the character in shadow. Use shallow depth of field to partly conceal a ghoul in a dim, blurry area of your image. Use a highlight to display a vampire’s fangs, while the rest of the creature is obscured in darkness.

Play around with the white balance

The auto white balance on the Sony Alpha typically works very well. This is another area where you might deliberately turn off the auto function and experiment with setting the wrong WB for the conditions. Shooting under tungsten lights with the camera set to daylight WB will yield a red cast in the image. Florescent lighting will look green. Set the camera to the correct white balance for electronic flash, then shoot under tungsten lighting without the flash. The result will cast the image with a deep, ice blue.

You can use this to add the appropriate color shift to your photos. Follow Hollywood’s lead. In the movies, space monsters usually display a green cast, while monsters often take on a blue shade. 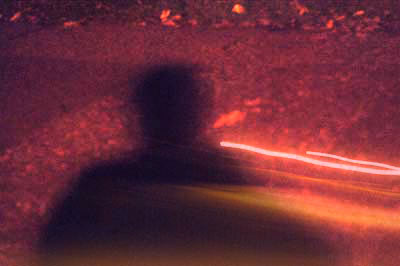 Hitchcock style self portrait. The shadow was shot at ISO 3200, with the camera held at my waist. The light came from an overhead street light. The streaks came from a second image, shot at a 1/2 sec. exposure and overlaid on the shadow picture in Photoshop.

Of course, if you shoot RAW, you can easily manipulate the white balance on your computer. Still it is helpful to see the effect of WB range on the LCD screen when you shoot.

Another idea is to jettison color all together. Some of the most famous horror movies of all time were shot in black and white. Even some modern feature films resort to monocolor to enhance the spookiness. High contrast black & white images can look truly stark and foreboding. While you could shoot in the black & white mode, I prefer to shoot in color and convert to B&W on the computer.

Programs like Photoshop and Lightroom allow you to desaturate an image while leaving a hint of color in the image. I leave it up to you to think of ways you could use this technique to customize your Halloween photos.

Halloween is a great time to play with special effects filters

When I started in photography, one common special effect was to smear Vaseline on an old filter. You can smear the grease to create weird out-of-focus patterns that strangely distort the appearance of your subject. This will give you a one-of-a-kind effect that will set your images apart from those of anyone else.

If you want to try this, be sure to use an inexpensive filter. Never use anything like this on the elements of your expensive lenses.

Vary effects, don’t shoot too many of the same type

With any special effect technique, a little goes a long, long way. The first time a person see a nicely done effect, their response is “cool!” After seeing several similar photos in a row, the impact starts to wane. If the entire gallery is composed of the same effects repeated over and over, the viewer will grow bored and restless.

So mix things up. Try a variety of effects, so your gallery or slide show doesn’t look stale. You can even mix in some more conventional straight portraits. These will contrast nicely with the more extreme images and show off the costumes and decorations without any distraction.

I am not advocating that you use these experiments as an excuse to pass off shoddy work as “art.” When I mess around with this sort of thing, I realize that the bulk of my images will be rubbish. Hopefully, however, at least some of this trial and error photography will result in unforgettable images. Even if I fail to achieve anything successful, I will have learned more about abstract photography and what works and what doesnâ€™t. That will make me all the better when I return to shooting my normal, carefully crafted photos.