Now that we can bask in the glow from two new Sony Alpha dSLR models announced in the last four months, it is time to step back and wonder about the original Alpha — the Sony A100.

Sony has finally admitted that the A100 has been discontinued, although many observers believe A100 production stopped months ago. That doesn’t mean here aren’t plenty A100 kits in the pipeline. If you want a new Alpha A100, you probably can find one easily. The question is; should you buy one and how much should you pay?

Long time readers of Alphatracks may feel I don’t really like the A100, as i seem to always be negatively comparing it to the A700. That isn’t true at all. The A100 is a nice enough piece of hardware, but it is totally outclassed by the features of the A700. The A700 is superior in every way to the A100. Then again, the A700 is selling for about twice the price, so it should be superior.

Viewed on it’s own merits, however, the A100 is still a solid dSLR. It lacks many of the features available on pro and semi-pro dSLRs, but then so does the Nikon D40 and the Canon Digital Rebel. You get what you pay for, and if you don’t need those high-end features the A100 could serve you very well. 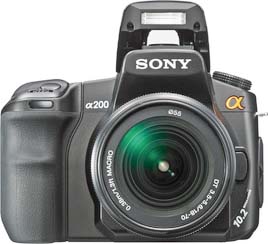 The big question is how will the announcement of the all new Sony Alpha A200 affect to the price tag on the remaining A100 kits? The A200 is much closer in specification to the A100, so comparing the two cameras is easier. Once again, the A100 lags behind the newer model, but the differences aren’t as great. The two cameras boast the same pixel count and feature set. The new A200 offers faster auto focus, a larger LCD screen, faster burst shooting and several minor improvements. The A200 will accept a Sony made vertical grip and Sony claims the high ISO performance has been tuned to dramatically reduce noise.

About the only area where the A100 can claim to be better than the A200 is the controls, as the A100 is quipped with two top panel knobs, while the new model has been reduced to a single adjustment knob. It is a nice feature, but i doubt many photographers would choose the A100 over the A200 because of this solitary advantage.

Here is the thing. When the A100 was introduced in June 2006, it was the first 10mp dSLR to break the thousand dollar price threshold for body and lens. Originally priced at $999.00 ($899 body only) Sony gradually reduced the list price to accommodate the changing marketplace. 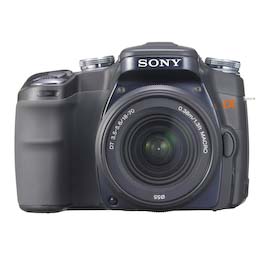 Sony Alpha A100 is still available in many places. How much would you pay for one?

During the 2007 Christmas shopping season, I spotted the A100 at several of the local outlets — Best Buy, Circuit City, Office Max and HH Gregg. All four stores were advertising a price of 695.00 for the camera and kit lens — two hundred dollars less than the original 2006 sticker price.

Can you say yikes? Obviously these prices won’t hold. The A200 isn’t available as yet, but Sony claims it will ship in February. Unless you absolutely have to have a camera now, it seems to be a no brainer to wait and get the better model. Otherwise you would be paying more for a lesser featured camera.

So what so you think the price of the A100 should be? If I were in the market for a dSLR in the A100/A200 class, it would take a substantial price cut to get me interested in the A100. If the difference was only $50.00, I would definitely spend the extra cash and get the better A200. I think the improved features of the A200 are easily worth more than a hundred bucks, so I would need to see prices fall well south of $600 before I would consider a new A100 over a new A200.

So far, we have been discussing brand new, full-warranty cameras. What about used models of the A100? If you are hoping to sell your A100 in the near future, you are probably going to have a hard time getting what you think it is worth. I don’t know how many A100s are still on dealer shelves, but I expect to see some fire sales as dealers clear the old stock to make room for the new hardware. How much would you pay for a used dSLR when you can buy something brand new for less than $600?

Of course there may be suckers who aren’t willing to do their homework before trading their cash for a shinny dSLR. When Minolta exited the camera businesses there were plenty of brand new Maxxum 7d camera kits in the warehouse. I saw several reputable outlets — places you know would stand behind their merchandise — selling brand new 7ds with warranties for less than $650.00. At the very same time, I saw numerous 7d auctions on eBay where the uninformed bid over $900 for a used model.

Back to the subject of pricing on the A100, I think we are going to see some interesting times in the months ahead. There are still many A100 hold outs who have decided to pass on the A700 and wait for the A900 (or whatever Sony ends up calling the flagship model). When the A900 is released, there will undoubtedly be a flock of used A100s on the market. If the dealers still have new A100 kits to rid themselves of, we may see some unheard of bargains for A-mount digital SLRs.