Sony quietly announced a new dSLR model Sunday, January 6. The new Alpha A200 dSLR is positioned as a replacement for the now discontinued A100 dSLR. The Alpha 200 will anchor the Alpha line as Sony’s starter SLR model, providing a low cost point of entry for those unable or unwilling to spend the cash needed to acquire an A700. 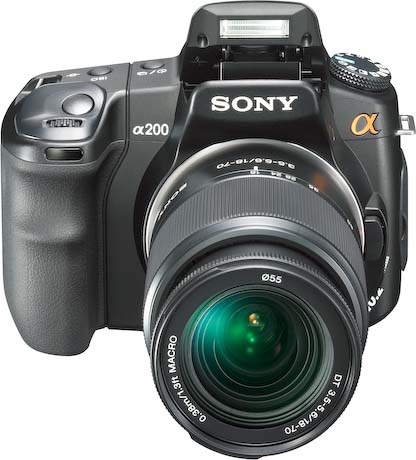 Sony will ship the A200, a new low cost dSLR, in February.

The new 10mp dSLR offers a number of improvements over the A100. Sony says the new camera is faster, lighter and easier to use. Two of the obvious enhancements include a larger 2.7 inch LCD screen and the availability of a vertical battery grip. Sony also claims the new camera offers reduced image noise and uses the same auto-focus system as the Alpha A700, which is said to be 1.7 times as fast as the A100.

The new dSLR includes the usual Sony/Minolta touches; Super Steady Shot, Sony’s DRO image optimizer, BIONZ processing engine and the anti-dust vibration system on the CCD sensor. Naturally the A200 accepts all of the A-mount lenses available for the A100 and A700. Sony and Minolta flash units compatible with the A100 will also work on the A200.

Those disappointed that the A700 did not carry on the legacy of the Maxxum 7D controls, will not find anything to cheer about on the A200, either. Sony reduced the control knobs to one and adopted a menu control to replace the missing dial.

The Sony press release doesn’t mention a PC Sync port (say it isn’t so!), so, like the A100, it is possible that the A200 will lack the ability to work with studio flash unless you use a hot shoe adapter. There is also no mention of tethered shooting, so you may need the more fully capable A700 if you want to shoot tethered to your computer. I hope I’m wrong about this and Sony just failed to mention it in the press release. But I’m not holding my breath.

I haven’t seen a picture of the new grip for the A200, but Sony identifies it as the VG-B30AM ergonomic vertical grip, so it is not the same grip used on the A700. Like the A700’s grip, however, the VG-B30AM will provide space for two InfoLITHIUM® batteries.

Now the real interesting part: the price. Sony says the A200 equipped with the DT 18-70mm f3.5-5.6 3.9x zoom lens will list for about $700 and will be available in February. They don’t quote a body only price, but as a benchmark, you saved about $100 when you purchased the A100 without the kit lens.

The A200 should provide Sony with traction in an area where they dearly need it — the low-end, starter SLR market. Priced at roughly half the price of the A700, the new camera should go a long way toward building Sony’s market share and greatly expand the ranks of A-mount shooters.