Ok, the Sony A200 dSLR hasn’t even started shipping yet, but already the rumor mill is racheting up into a fever pitch. The majority of the rumors are claiming Sony will introduce at least one or perhaps two new dSLRs slotted between the A200 and the A700. The new cameras, which the rumor sites have started identifying as the Alpha A300 and A500 models, are supposedly designed to provide Sony with a full range of dSLRs and offer Alpha-mount users a series of competitive price points.

Of course, Sony hasn’t even told us that the flagship SLR will be called the A900, although most camera pundits are already calling it by that name. They haven’t said that there will be an A300 or an A500 or any camera between the A200 and the A700. Then again, Sony didn’t tell us much about the A700 before it’s release and they certainly didn’t tell us anything about the A200 before the announcement. In this matter, it seems Sony is patterning itself after Apple, Inc. Apple’s Steve Jobs is famous for keeping an extremely tight lid on future products and the Mac rumor sites drive their readers crazy trying to guess what Apple’s next move will be. It isn’t difficult to draw a parallel to Sony’s dSLR camera division, which seems more secretive than the other top-ranked digital SLR camera makers. 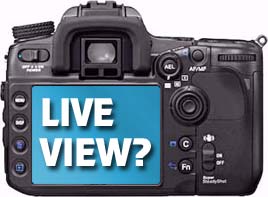 So the rumors could have at least a grain of truth to them. There are even “leaked” photos of the supposed middle of the road cameras. You can see one set of leaked A300 photos at Photogrqphy Bay. Slash Gear offers the same tilt out, LCD Live View Alpha A300 photos.

Of course, in the days we find ourself in, photos are hardly overwhelming evidence. You can create some very convincing fakes in Photoshop, especially if you mix parts of various existing cameras. In the Apple Inc. rumor scenarios I mentioned, there have always been dozens of very well done, fake images floating around, especially before an upcoming product launch. Even some big name media outlets have published these fake photos as the “real thing,” then they had to swiftly backpedal when the actual Apple announcement was made.

So I am not going to speculate too deeply about the supposed new models, other than to wonder if there is a valid reason for Sony to offer any models between the A200 and the A700.

On the face of it, I don’t understand why Sony would need a fist full of camera models. To my mind, the A200, A700, A900 lineup seems to cover most dSLR users. If anything, I think Sony could use a stripped down dSLR model priced beneath the A200 that would coax more point and shoot users to move into a dSLR. At the same time. however, I am perfectly willing to concede that Sony has their own strategy for the Alpha line and they are more qualified then I am to plan their future dSLR offerings.

Minolta, of course, offered a plethora of models once they started to flesh out the A-mount line. If you check out Mike Hohner’s great Sony/Minolta Auto Focus body list, you will see that Minolta sold models to fit every possible need and price range. Did consumers really demand that many different SLR bodies? Apparently Minolta thought they did.

Details are sketchy, but the supposed leaked images show a camera similar to the A200 with a tilt out LCD screen. The implication is that the new model(s), if they are real and not some Photoshop wizard’s fantasy, will have Live View.

Now remember these are rumors we are talking about here — not confirmed facts. Shortly before the A700 was launched thee were some very respectable camera writers suggesting that the Advanced Amateur dSLR (which was released as the A700) would have 14mp and feature a 1.25 crop sensor. Neither came to pass, the A700 uses a very respectable 12mp, APS-C sensor. But many enthusiasts were disappointed that the camera did not live up to the rumors. If you are going to play the rumor game, you have to accept that fact that some, if not most, of the information will be inaccurate. That’s just the way it is.

Having said that, a lot of Alpha enthusiasts are speculating that Sony will release a new dSLR model priced around $1,000 US — smack in between the A200 and the A700.

Live View? Maybe that is worth three bills to some people — it certainly isn’t to me. There are a few legitimate uses for Live View, but I would guess I would use Live View for less than 5% of my shooting. Is that worth $300 to you?

The other laughable suggestion is that Sony will equip the fictional $1,000 camera with a larger sensor…maybe the same 12.7MP sensor the A700 uses.

I ask you, if Sony suddenly unleashed a 12mp dSLR priced at a grand (list), what role would the A700 play in the Alpha line up? If you had the chance to buy an A200 style body with the sensor from the A700 at $1,000, would you ante up the extra $500 or so for an A700? Maybe some would, because the A700 is definitely a superior camera. For most users, however, the thousand buck 12mp dSLR would do nicely, effectively cannibalizing sales of the A700.

There are, of course, some limitations to the A200. AFAIK, there is no PC sync port and it doesn’t offer provision to tether the camera to a computer. I could be wrong on both counts, because the Sony A200 press release doesn’t address these issues. But I don’t see evidence of a PC port in the advance photos and the Alpha A100 lacked these features, so I am assuming the replacement will as well.

Would an 10mp A-mount SLR with Live View, PC sync and tethered shooting be worth $300 more than the A200? I’m not sure, but it would definitely be a step in the right direction. What’s your take on the A300/A500 rumors?