What a difference a year makes. At the 2007 PMA show Sony Alpha dSLR line was shunned by most of the press. There were no great announcements, although Sony did show off two mockups of yet unnamed dSLRs. The “Advanced Amateur” model eventually came to pass as the A700, while the tantalizing “flagship” is still waiting to be released. Other than the concept cameras, which Sony refused to elaborate on, there wasn’t much to see. The press lavished tons of coverage to other major and minor dSLR offerings, but except for the few A-mount sites and forums, Sony was just a postscript at PMA 2007.

Sony was not about to let that happen again. The 2008 PMA show was packed with Sony and Sony Alpha dLSR news. Of course everyone is still talking about the incredible 24mp, full-frame sensor that Sony announced, and the introduction of not one but two new live view dSLR bodies caught a lot of people by surprise. The A300 and A350 are a huge shot in the arm to the Alpha line, and should go a long way to convince potential customers that Sony is serious about playing in the dSLR arena.

In the excitement of the huge sensor and live-view SLR announcements, many observers may have overlooked Sony’s release of several new dSLR accessories. 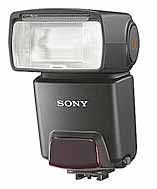 Sony will add a new flash unit to their existing Alpha flashes.

The first totally new Sony Alpha Flash unit, the HVL-F42AM, will be available in the near future. The other Flashes in Sony’s line up appear to be re-badged versions of Minolta flash units. That isn’t a bad thing, Minolta’s wireless flash system was considered by many to be excellent.

The new HVL-F42AM might appear to be a middle of the road unit, filling the gap between the the HVL-F36AM (GN 36) and the big HVL-F56AM (GN 56). While the new flash’s guide number of 42 does place between the current two Sony shoe mount flash units, the HVL-F42AM has an zoom range of 24-105mm. You can cover up to a 16mm lens with wide angle adapter. The current flashes in the Sony catalog offer a range of 24-85mm and the adapter covers 17mm.

As usual, Mike Hohner seems to have an inside track on Sony’s latest products. Here is Hohner’s “Flash tech data for Sony Alpha HVL-F42AM” page.

There is also a Sony Europe press release covering the PMA announcement floating about. Here’s what the release has to say:

Available as an option, the powerful new HVL-F42AM Flash unit is ideally suited to the needs of experienced digital photographers and newcomers alike. Alongside ADI metering and wireless remote operation, it offers automatic WB adjustment with colour temperature information plus an evolved Bounce System with vertical adjustment up to 90 degrees, left to 90 degrees and right to 180 degrees.

With wireless, ADI and manual modes, plus a full range of tilt and swivel possibilities, the new flash unit sounds like it might be an excellent addition to any A-mount user’s camera bag.

Then there are the lenses. Although technically not a PMA announced product, Sony’s latest two lenses were introduced on the eve of the show, so they might as well be considered new PM products. Both of the new lenses use SSM technology for quicker auto focusing. 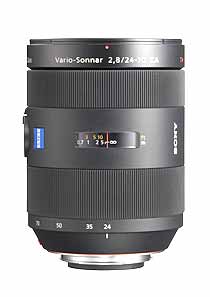 The SAL2470Z lens excels in difficult lighting circumstances thanks to its f/2.8 aperture, which remains constant throughout the focal length range. The nine-blade, circular iris is especially useful in controlling background defocusing in portrait and landscape images. Combined with Sonyâ€™s in-camera Super SteadyShotÂ® system, this lens is the only full-frame compatible large aperture standard zoom with the benefit of image stabilization available in the industry.

The SAL70300G lens incorporates the optical performance of Sonyâ€™s G series in a compact and flexible telephoto zoom lens ideal for sports and portrait photography. Constructed of 16 elements in 11 groups, with one extra-low dispersion element, this lens offers superb contrast and sharpness across its wide focal length range.

The use of extra-low dispersion glass compensates for chromatic aberrations which challenge long telephoto zoom lens design, maintaining excellent optical characteristics from center to periphery. Internal focus construction not only realizes compact size, but also a close focusing capability of just 47 inches (1.2m), unusual for a lens of this focal length range. 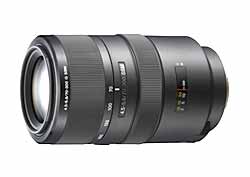 Like the SAL2470Z, focus drive is provided by Sonyâ€™s Super Sonic wave Motor (SSM) technology. Silent and highly accurate, the SSM system is ideal for providing larger lenses with the speed and rotational precision often required by telephoto shooting. To match auto focus operation to the situation, a focus range limiter can be set to a minimum distance of three meters. A lens barrel mounted focus hold button locks focus if desired.

These lenses are good ammunition to use against those who imply that Sony doesn’t offer sufficient quality glass to complete against the “established camera makers.” We will have to wait to see how these lenses perform in the real world, but it sounds like they could hold their own against anything similar from other manufacturers.

Next up, the new vertical grip. Again this isn’t technically a PMA product, as it was announced along with the A200. The grip is available now at a lest price of $249.00 (less batteries). The PM news is that it is compatible with the A300 and the A350, as well as the original A200. This provides a great deal of flexibility if you trade up or add second body in the A200-A350 family. It does not fit the A700, which has it’s own specific vertical grip, and will not fit the A100 style bodies.

Also optional, the VG-B30AM Vertical Grip allows comfortable handling in portrait or landscape shooting positions. The grip holds up to two NP FM500H Rechargeable Battery Packs for an extended shooting stamina of up to 1460* images (820 images in Live View mode) from a single charge.

With the PMA announcements, Sony has taken a major step forward in it’s quest to become a major player in the dSLR realm. Many observers have relegated the Sony Alpha as niche product, offering some nice features but unable to compete against the big name dSLR makers. Sony continues to add luster to its brand, unhurriedly creating a dSLR system that can compete against the best of the best. As these products begin to gain momentum in the marketplace, watch for Sony to assume a dominate role as a dSLR maker.