Sony quickly ended speculation about whether the new 24mp sensor would show up in the yet to be officially named “flagship” dSLR. Soon after Sony announced the full frame sensor, several high-profile Sony doubters expressed their opinion that Sony would never use the sensor in their own cameras, because after all “Sony would never dare to challenge Nikon and Canon in the pro arena.”

Here is what technology site Gizmodo had to say when Sony took the wraps off the new sensor: “Sony isn’t about to pop it in one of its Alpha models, at least not as far as we can tell.” That idea was echoed by several other commentators.

That sound you hear is those same forecasters gnashing their teeth after Sony proclaimed that, yes indeed, the upcoming flagship will be equipped with the big full frame sensor. So much for the theory that Sony is afraid of competing in the professional category.

There is, however a minor mystery. The new full frame sensor is rated at 24.8 megapixels. The flagship, on the other hand, will boast 24.6mp. That unexplained 0.2mp difference has led to some interesting speculation. 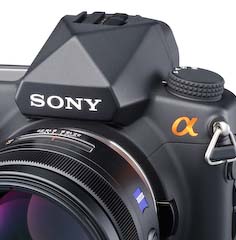 Some have suggested it is a completely different sensor. Sony however has indicated that the flagship will use the recently announced full frame sensor.

If you’ve been reading Alphatracks for any length of time, you know we have discussed at length the ramifications of installing a full frame sensor with in-body stabilzation.

Of course Sony hasn’t said the missing 0.2 megapixel is related to the Super Steady Shot. Perhaps there is some other reason Sony trimmed that portion of a mp from the sensor. Since the flagship will use a CMOS sensor, it should be possible to “shut off” any unneeded pixels.

Sony has said the flagship will ship this year. Many observers are suggesting a Photokina timeframe. (September) Sony hasn’t confirmed that — in fact Sony hasn’t said that the dSLR will be known as the A900, although many people have already started calling it that. Sony has firmly said the dSLR will ship in 2008.

To me, it really doesn’t matter where that 0.2mp went. The flagship will be full frame and pack more that 24mp.

All of a sudden those Sony haters have started to get rather quiet.

Sony Alpha A77 and A65 | New Cameras, New Capabilities